The City of Snohomish is required to adopt the newest version of the Department of Ecology (Ecology) Stormwater Management Manual for Western Washington by December 31, 2016. This is a mandate for Phase II jurisdictions (which include the City) to comply with the National Pollutant Elimination System (NPDES) permit. The NPDES permit is regulated by Ecology, and is renewed periodically.

One of the primary changes in the new Manual is a larger focus on Low Impact Development (LID) stormwater techniques. The objective of LID is to have developed land mimic the hydrologic characteristics of pre-developed land in its natural state of vegetation. This means more rain water going back into the ground, instead of being stored in vaults and ponds before ultimately being conveyed to the rivers and Puget Sound. Once the new Manual is adopted, proponents for new development will be required to check to see if on-site infiltration is possible for treating stormwater.

Many jurisdictions are used to the old way of doing things, so the codes and regulations are not set up to encourage this type of development. One element of adopting the new Manual is to revise the codes to remove “barriers” to LID, and instead encourage it in new development. These changes must be made prior to, or at the same time as adoption of the new Stormwater Manual.

In the City of Snohomish, the codes regulating stormwater runoff are largely contained in Chapter 15.16 (Stormwater Management) of the Snohomish Municipal Code, however applicable regulations may also be found in Title 14, the Land Use Development Code, as well as the Engineering Design and Construction Standards. Various changes need to be made to all three documents, in order to facilitate LID and comply with the requirements of the City’s NPDES permit.

The new Manual and all associated code amendments must be adopted by the City Council by the end of 2016. City staff has been working on this project for several months, first identifying barriers in the existing regulations, then drafting revisions and new language. The proposed code revisions are complete, and the project is ready for public review and discussion. The Planning Commission and City Council will both hold two separate discussions on this item prior to the public hearings later this fall. The tentative schedule for all public meetings is shown in the image below. 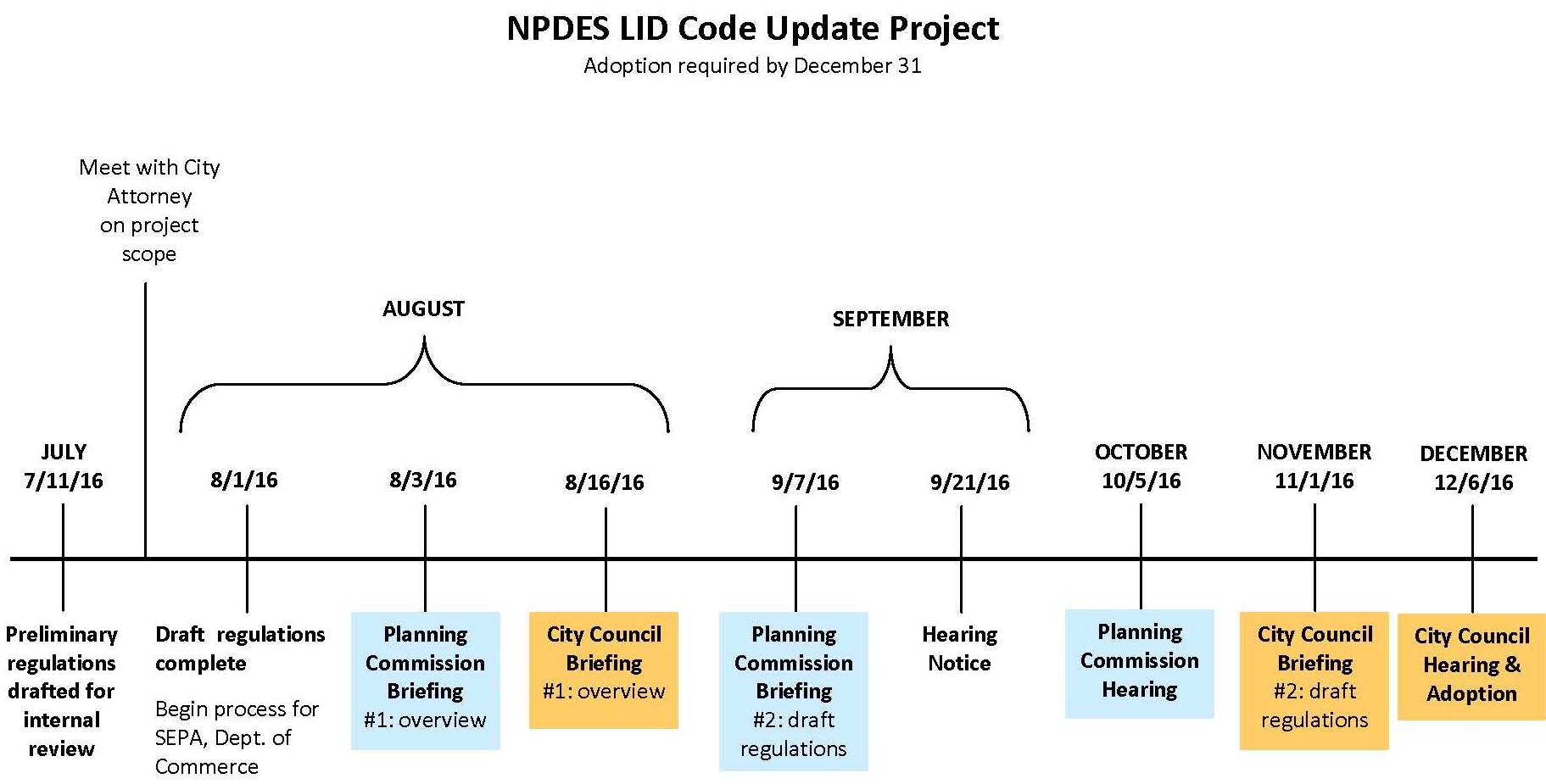